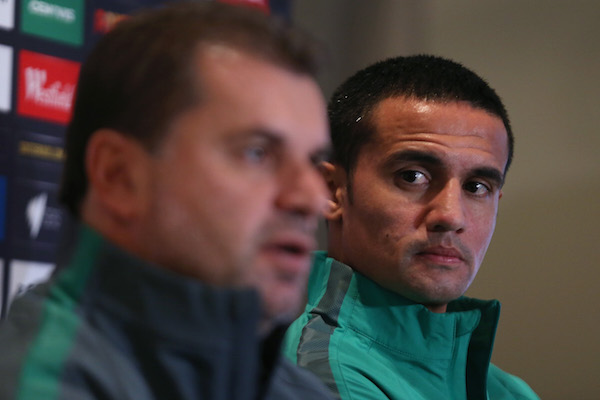 Tim Cahill has lauded the visionary approach of Socceroos boss Ange Postecoglou for restoring a positive vibe around Australian football.

Speaking to media at AAMI Park today, the 36-year-old forward implored the general public to adopt a similar level of grounded optimism around the current state of the game, hinting that major international success could follow.

“I think what he’s (Ange Postecoglou) trying to say is, don’t accept average. We’ve exceeded in every single sport that we’ve played in, we’ve dominated in every single code that we’re apart of. We’re Asian champions.” Cahill said.

“I think there comes a time in every sport that when you dominate in certain areas that you’ve actually got to look beyond that box, and really try and achieve something special. Because without that belief, we’re just making up the numbers”.

The 36-year-old forward says self reflection is key, and wants the game’s supporters not to concern themselves with competing codes in the quest for Australian football to grow in stature both domestically and internationally.

“Instead of worrying about AFL or Rugby League, just keep going at our own pace. Keep improving the game, keep raising awareness, keep bringing great players back to the country, some Brazilian flare (Bobo, who was with Cahill at the media conference), keep introducing new talent, but just try and support the game where it’s going to grow.”

Postecoglou, in the eyes of many, has revitalised the aura around the Socceroos not seen since the 2006 World Cup. The former South Melbourne, Brisbane Roar and Melbourne Victory boss is key to that continued growth, and that without his presence and experience, it would not be possible according to the Melbourne City star.

Cahill’s Melbourne City begin their A-League campaign away to Wellington Phoenix on October 8, before a Melbourne derby in round 2.

Road to Rio 2016: A look at Argentina’s final squad